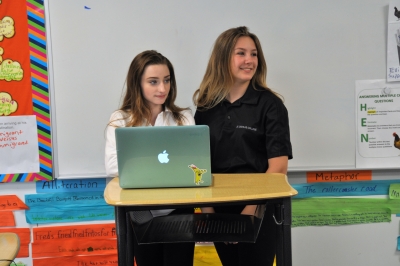 They recently developed a soundtrack for the book by author Paul Toffanello, “Popchuck’s Revenge”. They had to find songs that connected to the story they read.

The top selections were presented by Skype to the author who hails from Timmins. Toffanello is now sharing the music selections with his movie producers!

Toffanello visited the students earlier in the school year to work with them on writing for a purpose. At the time, he shared the first eight chapters of his latest novel. He’s a former English teacher, Principal and Director of Education. 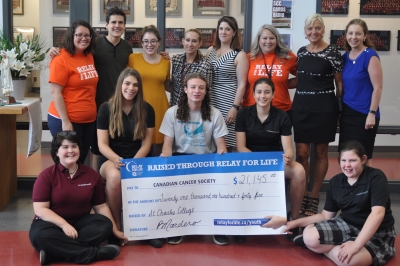 The St. Charles College Cardinal Relay Committee presented a cheque of more than $21,000 to the Canadian Cancer Society during their annual Relay for Life event.
Lead organizers, Jennifer Humphrey and Krystal Rewega are looking forward to next year. Principal Patty Mardero says “it doesn’t matter what goal is set for the Cards, they always have a way of meeting and also exceeding their target which is a true testament to their character and strength.”

Popular radio personality DJ G-Rant of The New HOT 93.5 led the troops early Tuesday with an inspirational speech highlighting his own personal battle with the disease. He encouraged the students to give blood when they are the legal age to do so. He also inspired the students to think about their legacy in the world long after they are gone. He also participated in the highly emotional Survivor’s lap – where students, parents, grandparents and staff members who are fighting cancer walked together in unity with all other students following suit as their allies and supporters.

The day-long event featured water balloons, bucket drops, lots of music and entertainment, yoga, Zumba and many other activities to keep the students motivated and having fun throughout the day. 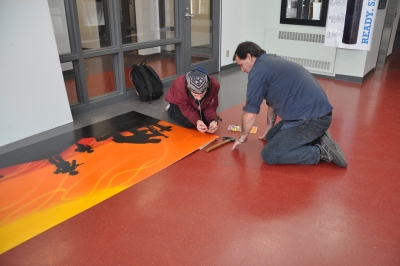 St. Charles College has been awarded a Catholic Education Foundation of Ontario award for 2017. The RJ McCarthy awards are given to schools for projects that nurture the growth and education of the whole person.

The School plans to use the funds to support students in the Open Doors program, a program to assist at-risk youth. The students in the program will spend the next year building partnerships with local parishes thereby strengthening their faith and faith opportunities.

St. Charles College is the only school in Northern Ontario to be granted this award.