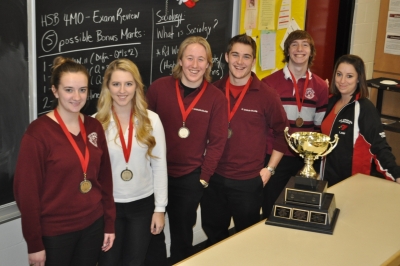 The grade twelve law class at St. Charles College is celebrating victory after winning the City Mock Trial Championships January 14, 2013 at the Sudbury Courthouse. There were fourteen teams from all four Sudbury school boards competing for the coveted Justice Patricia Hennessy Trophy.  Cardinal Miranda Goudreau won the Best Defense Advocate Award for her work on the drug possession and trafficking trial.  Goudreau says “I have learned to live and breath Law all semester and it was nice to see all our hard work has paid off.  I have never taken part in anything that has compared to this experience and this amount of work.”  Teacher Jaime Sauve says “the team set itself above the rest because the oral presentation was excellent and the group came up with loopholes in the case that other groups had not considered.”  This is the second time in three years that Sauve’s class at St. Charles College has taken the top prize. There will be no rest for the weary.  The team must continue to work towards competing at the Provincial Championships in Toronto this April.