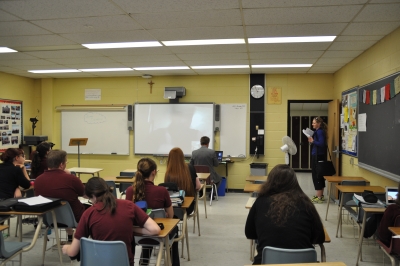 The St. Charles College World Issues Club further expanded its horizons this June thanks to Skype. The students spent an hour asking questions to an English teacher in Damascus, Syria. Bashar was a tour guide until civil unrest made touring the country too dangerous. Teacher Dan Boisvert, who travelled to Syria in 2008, continued to correspond with Bashar through social media. He originally suggested to the World Issues Club that they communicate with Bashar’s English students but the school’s manager in Damascus was uncomfortable allowing Syrian students to communicate with Canadian students over the school’s server. Bashar, however, was more than willing to Skype with St. Charles College from his home. He began by explaining that his family could not survive without the financial support of his father who lives in Kuwait. He apologized if the connection was lost but he never knew if it was the roaming blackouts imposed by the government or if the rebels or ISIS had attacked agenerating station. The students asked Bashar about the political situation, the religious issues, and the treatment of women in Syria. They also asked what sports were played, favourite foods and pastimes. Students were surprised to hear that women held positions of power in government and that although women were empowered in politics, the social hurdles were more difficult to overcome. He further added that he loved chicken, indoor sports were gaining in popularity because of the possibility of attacks from ISIS or rebels or drones, and Syrians watched a lot of television. Television dramas were all the rage during Ramadan so new programs began during this month. Bashar concluded by saying that he was very afraid for himself and his family. Ramadan was about to begin and this year it would be during the longest days and the warmest time of year. This would perhaps test the patience and the faith of the Syrian people.

The next day the World Issues Club spoke with Claire, a teacher who lives in Adelaide, Australia. Claire taught in Alexandria, Egypt during the “Arab spring” uprising. She explained that she would probably not return there because it was very difficult for her as a white, female foreigner. It was also quite dangerous to be in Alexandria during this period. Claire toured Turkey, Syria, Jordan, and Egypt with Mr. Boisvert in 2008 and she explained that the manner in which women are treated was perhaps the most oppressive in Egypt. As for Australia, she talked about the fact that it was quite cold in Adelaide at the moment (10°C) because it was their winter. She also talked about the national sports that are loved by Australians such as Australian rules rugby, cricket, and netball. When asked what can’t kill people in Australia, she laughed and stated that: “Not everything can kill you, we have koalas and kangaroos and wombats and they’re quite cute and cuddly.”