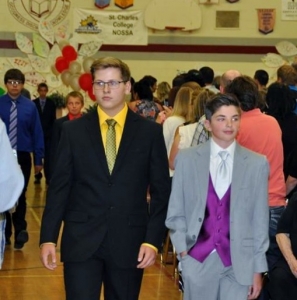 This year was the first year that grade seven and eight students were introduced to the mix at St. Charles College. The high school which has been in existence since 1951 introduced a 7-12 model in September 2015. That meant there was not one but two sets of graduates this year.

June saw more than 200 grade twelve students cross the floor and then another 100 students again to form the first ever graduating class.

Along with their diploma, each grade eight student was given a special gift in preparation for grade nine next year in the high school setting.

In photo: Grade eight students Loukus Lalonde and Aidan Ragognia head down the aisle to become two of more than 100 grade eight graduates for the first time in St. Charles College history.