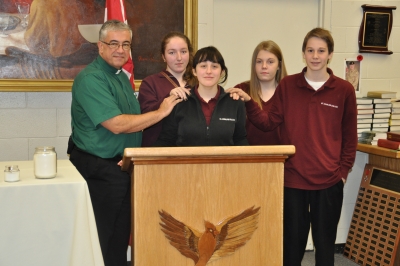 In celebration of bullying prevention week, a group of students gathered in the St. Charles College chapel at lunch today to speak about the challenges and pressures facing youth. Natalie Robert will be presenting about her teenage experience thus far at the Antioch weekend retreat this weekend. Natalie will be talking about building a community of faith and how we all have a responsibility to care for each other and ourselves.

Antioch is a weekend retreat to build relationships and spirituality.  It is being held this weekend and is held twice each year for incoming grade 9 students.

Deacon Steve Callaghan who leads the retreat says Natalie’s topic is fitting given this is bullying prevention week.  “If we are taking care of each other, that means we are saying no to bullying of every shape and form”. 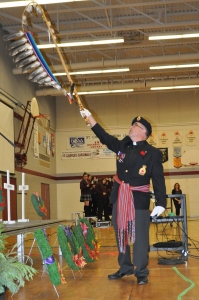 A November 11 ceremony of remembrance honoured soldiers whose lives were lost in historic wars but also highlighted former students like Pvt. Andrew Miller.  Pvt. Miller graduated from St. Charles College and was killed by an improvised explosive device in Afghanistan back in 2010.

Another fallen Cardinal was also honoured.  Cpl. Glenn Arnold was a medic technician who was killed by a suicide bomber in Afghanistan in 2006.

The moving ceremony included both staff and students from S.C.C. and its sister school, St. Bernadette.

The ceremony also included songs presented by the S.C.C. choir.