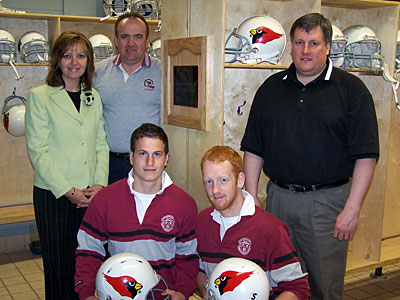 The St. Charles College football changeroom has gone through a major renovation. Matt Dumont, a Cards football player since 2002 came up with the idea of building individual lockers for the players in the football changeroom. He began designing the lockers with the help of the woodworking teacher, Mr. Baxter, in November 2005. Their design called for 43 individual booths.

Construction began in February 2006. Matt spent many hours of his own time on this project. Matt has truly left a legacy to his school. In his honour, a permanent plaque commemorating his efforts was installed in the changeroom. Many future Cardinal football players will now enjoy the luxury of sitting in their own personal booths in the locker area.

The Cards are now starting to prepare for their upcoming season in hope of capturing its 20th Senior Football championship. Go Cards, Go!