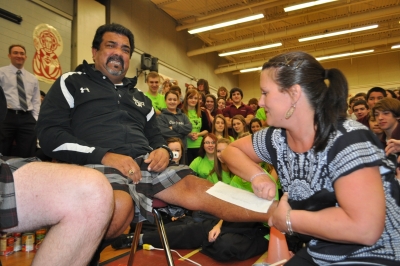 Jim Szilva of Freedom 55 and graduate of the high school continued the yearly tradition of remaining on a Greater Sudbury transit bus for a whole week until the students’ achieved the goal set by school administration to commemorate the 60 year anniversary of the school.

Principal Patty Mardero said:  “Seeing our students succeeding and doing well academically inspires me, but there is nothing more uplifting than watching the students at St. Charles College pull an entire community together by collecting one can at a time.”

In partnership with Rogers Radio Q92 and EZRock 105.3, the students worked tirelessly to collect as many food items as possible, and also worked at many of the local grocery store chains by bagging groceries in exchange for cans or monetary donations. Buses were also sent out every night of the week for students to reach out to every part of the large community and canvass the area.

The secondary school has been taking part in a community food drive since the mid eighties. 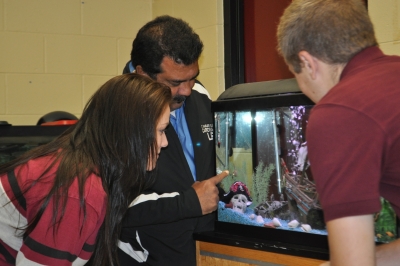 The students from two science classes at St. Charles College will get up close and personal with great Canadian scientist David Suzuki early next month.
Approximately sixty students at the school will take part in a virtual discussion with Suzuki November 2nd.
School science teacher Lloyd Rebeiro completed the application to participate.
Only 200 schools across Canada were selected for the virtual classroom discussions that are being hosted by the National Film Board of Canada and the David Suzuki Foundation.
Rebeiro says, “This is an opportunity of a lifetime for the students.  They all know who David Suzuki is because he is the greatest science and environmental guru in our country.”
To prepare for the virtual classroom event, students must watch and study “Forces of Nature:  The David Suzuki Movie.”
The student discussion with Suzuki will focus on Suzuki’s core message which is “humans have exhausted the limits of the biosphere and it is imperative that we rethink our relationship with the natural world.”
Some students may be chosen to the contribute to the discussion by asking their very own questions.
The event will take place at 1:30 p.m. on November 2nd in the school’s ampitheatre.