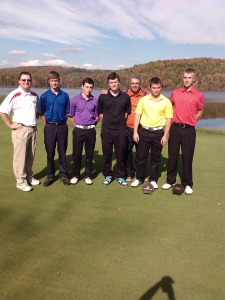 Congratulations to the St. Charles College boy’s golf team who won the Sudbury District Secondary Schools Athletic Associations (SDSSAA) golf tournament September 22 led by Stephen Gonko who also finished second in individual play at the tourney. The win qualified the boys for NOSSA play. At NOSSA the boys played extremely well with Ryan Lafreniere shooting 73 followed by Stephen Gonko with a score of 74. They placed both first and second in individual play. The team itself then had to play an extra hole breaking a tie with Franco-Cite from Sturgeon Falls. In the playoff, Ryan Lafreniere drove the green and two putted for birdie. The team proceeded to take the team competition thus qualifying them for OFSAA October 11-13 to be held in Belleville. Members of the golf team are: Stephen Gonko, Ryan Lafreniere, Joel Charlebois, Evan Purcell and Stan McGillis.