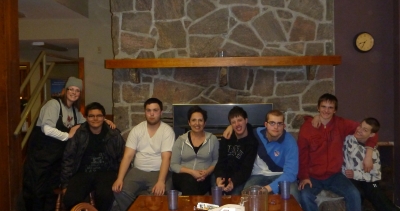 Recently, 20 students from St. Charles College had the opportunity of a lifetime. These students from the Life Skills program spent three days and two nights at the Tim Horton’s Camp near Parry Sound where they took part in leadership workshops. At the camp, the students were given the opportunity to grow and learn as a group working through such topics as role-modelling, overcoming obstacles, and decision making. All activities were done in an outdoor environment, which made it a unique and exciting adventure for the students. Part of the program involved the G.R.E.A.T. bead program which was created to highlight the achievements that the campers experience at the camp. The different coloured beads – which stand for Goal setting, Responsible leadership, Environmental awareness, Adventure and creativity and Teamwork and friendship, are earned and become a take home reminder of all that they have accomplished at the camp. Patricia Demore, one of the teachers that accompanied the students was extremely proud of her class as they “exemplified true Catholic students during their stay,” Demore explained, “During their whole experience, our students showed compassion, citizenship and a real sense of community. They had an amazing time and some really strong friendships were formed between our students and others that also attended the camp. We are really hoping to make this an annual event as it was a priceless opportunity for us all.” Demore, the students who participated, and the rest of the St. Charles College staff want to thank Tim Hortons once again as not only did they organize the event for the students, they also covered all expenses for the entire trip.