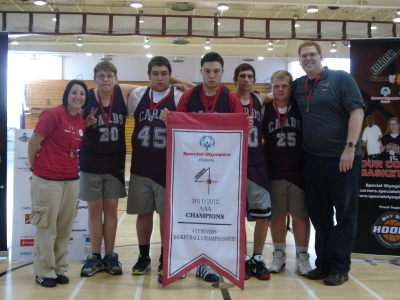 On May 3, students from St. Charles College travelled down south and competed at the 4 Corners Basketball tournament put on by Special Olympics Ontario. There were four divisions at the tournament and the team from S.C.C. were put in division 3 which allowed for the opportunity for the team to play a total of seven games. Of the seven, the Cards won six and only lost one, resulting in the team winning the division three championship and taking home the gold medals and banner.
This trip was a result of the St. Charles College students winning the Sudbury tournament back in October and allowing them to advance to the all Ontario tournament in which twelve teams in total attended. Teacher and coach Charles Esau was thrilled for his team and was very proud of their accomplishments. “The students really outdid themselves during this tournament,” Esau stated. “We are so proud of their dedication and passion for their team. The represented St. Charles College with true Cardinal Spirit and brought home the gold – what more could you ask for?”