On Your Mark, Get Set… Let the Winter Outdoor Adventure Race Begin! 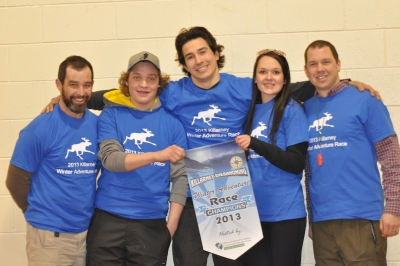 The scene was set for a perfect Winter Outdoor Adventure Race on Tuesday, February 26, 2013. The sky was clear, the temperature was above zero – and most importantly, there was a lot of snow in Killarney. Compared to past years, this year’s event had more than enough snow for organizer and outdoor education teacher for the Sudbury Catholic District School Board, Brad Blackwell, to really focus the adventure race activities on true Northern Ontario winter activities.

“This was our third year running the Winter Outdoor adventure race – and, as compared to year’s past, the abundance of snow allowed us to set up some true northern outdoor programming as part of the race,” Blackwell said. “We wanted to ensure that all of the students taking part got a real feel for adventures in the snow, and how to not only survive it, but excel and have fun in it!”

This year’s race participants included secondary students from St. Charles College, St. Benedict and Marymount Academy. There were fifteen teams of three and each team had to take part in every leg of the race. Upon arrival in Killarney, the students were given race packets and instructions, and were quickly directed to the outdoor start location. Once the rules were established and all safety aspects reviewed, the students lined up to begin the first part of a seven-part challenge. The entire race included a strategic stick toss, a snow-pile build (a scaled-down version of a quinzee), a 1.13 km sprint, a 750 run in snowshoes, a Frisbee target toss, a strategic orienteering challenge and a fire-lighting trial.

The snowshoe run, the orienteering challenge and the fire-lighting components proved to be the most difficult part of the race for the participants. The orienteering section was tricky as any wrong answers on their check sheet resulted in penalties of an additional five minutes added on to their final time at the finish line. Once the snowshoes were on, they had to stay on throughout the orienteering section of the race and the students were only able to remove them once they began their fire challenge. With the fire challenge, the students were given minimal materials to start their fire, and the ultimate goal was to get a metal can of water to come to a complete boil before sprinting to the finish line. In order to get additional materials for the fire, the students had to do a different number of laps around a section of the forest depending on what materials were needed – whether it be more kindling, extra matches, etc.

In the end, one of the teams from St. Benedict was the first to cross the finish line and, despite some errors during the orienteering challenge, they beat the next team by a mere 25 seconds. This team consisted of Kyle Herbert (grade 10), Doug Pitfield (grade 12) and Kayla Huchenski (grade 12). Not only did the first place team take home the banner for their school, but were also each awarded a brand new set of Tubbs snowshoes that were generously donated to the race by the Tubbs Snowshoe Company. What happened after the team was presented with their prize, speaks volumes about the outstanding character of the Sudbury Catholic students. Both Kyle Herbert and Doug Pitfield thanked the organizers for their prize, but as their families are fortunate to already own several pairs, decided to donate the snowshoes back to their school to support the outdoor education program at St. Benedict. “This most generous gesture by these two students really capped off what was already a truly exceptional day,” Blackwell stated. “These students poured their heart and soul into this competition, and in the end they proudly represented their school both during and after the race! All of the students that competed today truly represent the positive Sudbury Catholic spirit and I congratulate each and every one of them for an outstanding job! As well, I thank all of the teachers and volunteers who helped made today such a success!”

After a hearty lunch provided by the organizers, students began to get ready for departure, but were overheard by the teachers and volunteers already strategizing for the next outdoor adventure race in the spring.