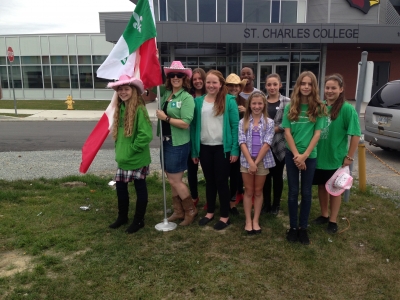 To commemorate the 40th anniversary of the Franco Ontarian flag, on September 25th, 2015 at 11:00am, over 1500 Franco- Ontarian flags were raised across Ontario to recognize the francophone community and their contribution to culture and history. It’s also a way to recognize the 400th anniversary of Champlain’s arrival in Ontario – marking the birth of Francophone culture.

SCC teacher Jessica Demore’s high school Immersion students were able to participate in the celebration and create their own flag raising ceremony. The students were also featured on the CBC/Radio Canada “carte de drapeau” or “map of the flag” and can be seen on one of the three Sudbury points on the map located at:http://ici.radio-canada.ca/regions/ontario/2015/09/25/002-drapeau-franco-ontarien-25-septembre.shtml

The students in the 7/8 Immersion program did the same under the direction of teacher Sabrina Rocca. Students were given the opportunity to experience their francophone culture, by learning about the meaning, and background history of the flag.

It also happened to be country/western day to wrap-up a very successful Spirit week at S.C.C.