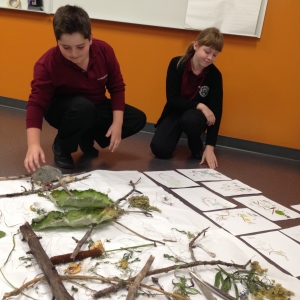 Grade 7-8 French Immersion students at St. Charles College take French, social studies, science, inclusive education and art outdoors. Students collected parts of nature, brought them inside and co-constructed success criteria around how everything that was collected can come together to form one. They were only allowed to pick up items that were not attached to the ground, hence that had already fallen on their own. Students decided to make an animal with everything that they had collected and together determined what that would look like and feel like. Each student had the chance to place one object at a time on the giant paper. One at a time, without moving the piece that the previous student placed on the page, the animal began to take shape. Students quickly saw how a variety of objects from different parts of nature came together to form one, just like our world. Students were then asked to sketch what they saw on the giant page. Even though, everyone was looking at the same thing, each picture was different as beauty and perception are in the eyes of the beholder. This lesson was based on the play Spirit Horse and was conducted in the French Language led by teacher Sabrina Rocca at St. Charles College.

Pictured are Colby (grade 8) and Kennedy (grade 7) from the French Immersion class at St. Charles College.