Cultural Skyping with Mr. Tim and Students in Egypt 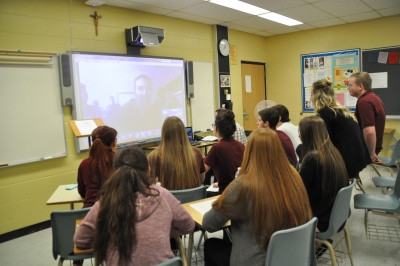 It was a morning of cultural education in Mr. Emond’s World Issues classroom on May 28.  The St. Charles College students skyped with Mr. Tim Kingshott and his students in Cairo, Egypt today where it was more than 40 degrees Celsius mid afternoon.

Mr. Tim Kingshott is a St. Charles College teacher but is teaching Physics and Math in English at a high school in Egypt this year, where students refer to him as “Mr. Tim”. The two groups of students got together to exchange questions about each other’s countries.

Students in Egypt asked questions about maple syrup, World Cup soccer, the Canadian army, as well as after school jobs, bullying, safety and British monarchy.  While the Egyptian students fielded questions about life in the Middle East.

Next week, the SCC students will be skyping with an English teacher situated in Damascus, Syria.

A number of students at St. Charles College have created a World Issues Club.  The club will be hosting its first big charity fundraising gala Friday night at the Croatian Hall.  If interested, call the school at 566-9605 for more information.