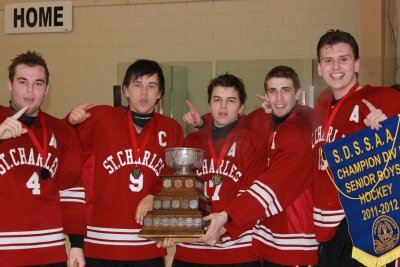 The Boys Senior Hockey team completed their Perfect S.DS.S.A.A. season on February 29th with a three game sweep of the Manitoulin Mustangs to win the City Championship. The team’s record was a Perfect 19-0. The team won the Regular season title and the Playoff title as well as every individual award possible for the season. Individual awards included:

The team is now preparing for the NOSSA Championship held on March 5th & 6th in Thessalon, Ontario.